Three orphaned siblings are forced upon confirmed bachelor Donovan (Bixby) in a 19th century boom town of Quake City, CA. After an earthquake shakes the area, the children find a large gold nugget worth tens of thousands of dollars. But their newfound wealth is causing more problems than it’s solving, so they agree to “give” the gold to two bumbling outlaws (Knotts & Conway). But they only way they can get the gold is to steal it from the bank vault where it’s being held for safe keeping.

Don Knotts and Tim Conway, two very big stars in their own right, teamed to do some very successful films mostly for the Disney Studio. Their comedy style was a lot like Laurel and Hardy, but in terms of individual stars teaming and being successful at both, the only comparison there is Crosby and Hope.

The Apple Dumpling Gang follows the misadventures of these two lunkheads as they try their hand at the outlaw trade. They accidentally shot a really fierce outlaw in Slim Pickens and left him crippled in one leg and he’s out for their hides.

Paralleling that plot is that of gambler Bill Bixby who wins what he thinks is a consignment of freight in a poker game, but what he really gets is the delivery of three children. Being a roving bachelor Bixby naturally thinks the kids will cramp his style and they do for awhile. Willing to help is Calamity Jane like character Susan Clark who drives for the freight line that her father David Wayne owns.

One thing I do so like about Disney films is the use of familiar Hollywood faces who were having trouble getting work. For example the brassy Iris Adrian, a little older and heftier, but still full of sass.

But the film really belongs to Conway and Knotts. Conway is the Laurel like figure in the partnership, dumb and he knows it. But he has for a partner Knotts who like Oliver Hardy is full of grand schemes who when they blow up in his face will always blame is hapless partner. But in point of fact Knotts is just a bad planner. 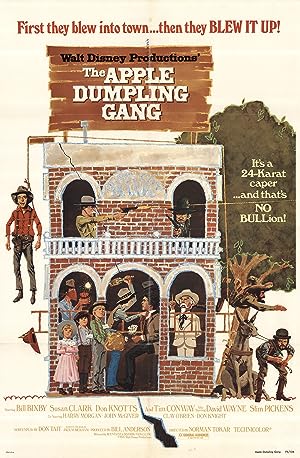