Indiana, 1817. The entire nation, only 40 years old and a few years removed from a second war of independence, is raw. Men, women, and children alike must battle nature and disease to survive in remote log cabins. This is young Abraham Lincoln’s world. Spanning three years of the future president’s childhood, The Better Angels explores his family, the hardships that shaped him, the tragedy that marked him forever, and the two women who guided him to immortality.

Not really, especially if you watched this without having a clue who the young boy is supposed to be. It could be just any story about any young boy growing up. But it’s not. It’s young Abe Lincoln, something you could completely miss, like I did. Which happens because I do watch movies without reading up on them. So while it was obvious this was going to be a black and white film, I didn’t know what it was about. It played at the Festival in Berlin, which does not always says a lot about the quality of the movie itself, but I tried.

And I wasn’t disappointed by the story of this boy. A story that is interesting in itself, but would not allow any conclusions about where this boy would go. Something people obviously did ask the director too, who was present at the screening. A very interesting stylised form, of a story of a man/boy you might not have heard/read yet … 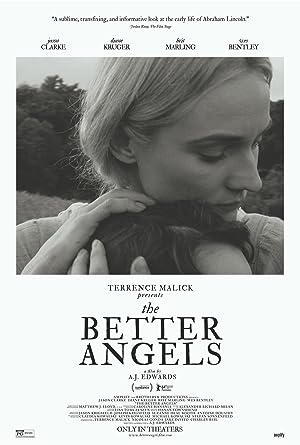 The Better Angels (2014)
95 min|Biography, Drama, History|07 Nov 2014
6.1Rating: 6.1 / 10 from 1,190 users
The story of Abraham Lincoln's childhood in the harsh wilderness of Indiana and the hardships that shaped him, the tragedy that marked him for ever and the two women who guided him to immortality.
Director: A.J. Edwards
Creator: A.J. Edwards
Actors: Jason Clarke, Diane Kruger, Brit Marling, Wes Bentley

Be the first to review “The Better Angels 2014” Cancel reply