The Boy and the Wind 1967 with English Subtitles

Young engineer on holiday gets involved with a boy having a strange relationship with the wind. Their close friendship arouses suspicion in the small town. When the boy disappears, the engineer is accused of murdering him. But the wind…

The things we like and why we like, specially the ones that makes us who we are, what creates our identity. A world full of possibilities and choices and we must stick with one special thing which may truly define us because it’s impossible to embrace the whole world and all of it. But sometimes that one thing we choose to follow might be misunderstood by the crowd, and we try to pretend we don’t care about what the outside world think or react while we’re doing our business in devoting our time and mind to that special thing. To the ones who watch us, a problem will come our way for liking “strange” things. For ourselves, it’s something we can’t avoid anymore, it’s there trapped in our systems and it’s all good. “O Menino e o Vento” (“The Boy and the Wind”) talks of topics as such and creates a strange and intriguing fantastic allegory on homosexuality.

Here’s the story is of a young engineer (Ênio Gonçalves) on vacation to a small town in Minas Gerais, trying to escape from the problems of the big city for a little while and enjoy the quietude and the wind – and apparently, the greatest winds all happen in that town. Weird but factual: he likes to feel the wind. Much to his contentment, he finds Zeca da Curva (Luiz Fernando Ianelli), a young boy who not only is fascinated by the wind’s movement but also knows they’re about to happen and knows the exact spots where to feel more intensely. From there comes a close friendship that isn’t seen with good eyes by the locals neither the boardinghouse lady (Wilma Henriques), who has a crush on the man.

That part of the movie occupies the second half of the movie, all in flashbacks; as we’re told from the early moments, the engineer is back to the place to attend his own trial for the alleged murder of the boy, who disappeared right after the last encounter between them. Most of the movie consists of the lead character’s trial and the reaction he gets from the simple local folks who believe he killed the boy and also think they both had more than just a friendship relation. And the witnesses for the case don’t make easy on the man, revealing suspicious acts that never are what they seem.

Possibly one of the first Brazilian LGBT films ever made, “O Menino e o Vento” doesn’t carry a high proud flag to its cause but salutes their fight – as exposed by the lead guy during the trial (“If all of you here are normal, then I’m a freak”). The movie works on the allegoric sense of those two main characters and how they share similar taste, similar liking and won’t deny it to anyone who asks them. That iconic shot when they both embraced each other while a huge windstorm was coming is just one perfect (quite innocent) ideal. But along the way…the boy has a girlfriend, the engineer is soon to be married and he is tempted by the boardinghouse lady. Zeca’s rich cousin is the only real gay character in the story but he’s someone who interferes in bad ways in the main character’s trial. But the ultimate message is one of following your heart, instincts and sticking to what you like, it comes with great positive things and there’ll always be someone who’ll understand exactly what you are and what you like.

Carlos Hugo Christensen’s film was a nice one though a little awkward in parts and with some cringing dialogues. Almost poetic but quite touching. But overall, the story was greatly presented, well acted by the two main actors (Ianelli’s first film and he steals the show at such young age) and the story progresses on a fine mode. However, I was hoping for a more conclusive ending than the one I’ve got. 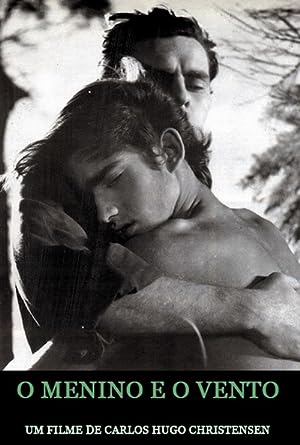