Home » Non-English with Subtitles » The Bridge 1959 with English Subtitles

The Bridge 1959 with English Subtitles

A group of German boys is ordered to protect a small bridge in their home village during the waning months of the second world war. Truckloads of defeated, cynical Wehrmacht soldiers flee the approaching American troops, but the boys, full of enthusiasm for the “blood and honor” Nazi ideology, stay to defend the useless bridge.

We were shown this movie at school, so I always remembered it as a politically correct piece educational film – which it is, in a way. This is film with a clear purpose. It wants you to learn something. The amazing thing is that it is also a good film. Its message “War Is Bad” is brought across not so much by showing blood, death and destruction but by the means of classical tragedy: There are no “bad guys” in this film; on the contrary, most people try to do good, be humane. (E.g. the boys are told to guard the bridge in order to keep them away from the front.) But what they do results in disaster, because the evil is war itself. 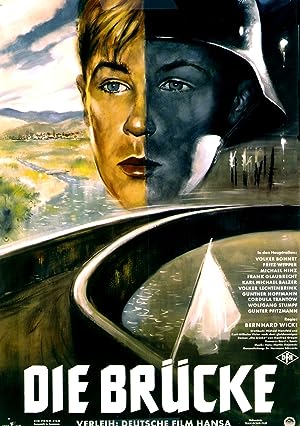