Andrew Crocker-Harris (Albert Finney) is an embittered and disliked teacher of Greek and Latin at a British public school. After nearly twenty years of service, he is being forced to retire on the pretext of his health, and perhaps may not even be given a pension. The boys regard him as a Hitler, with some justification. His wife Laura (Greta Scacchi) is unfaithful, and lives to wound him any way she can. Andrew must come to terms with his failed life and regain at least his own self-respect.

This was an unexpected jewel of a movie. If you like movies such as “Remains of the Day,” you will enjoy this one. Against the backdrop of a traditional boys school in the English countryside, a teacher who is being forced out examines his life. This movie is well-done across the board–the rich if spare script (perfect), the cinematography, a well-integrated score, all perfectly paced. This movie and the characters in it have layers. The acting by Albert Finney and Greta Sacchi is masterful (Michael Gabon is good, too). All that, and it has an honest ending. This movie had my rapt attention from the opening scene, and I am certain to watch it again. 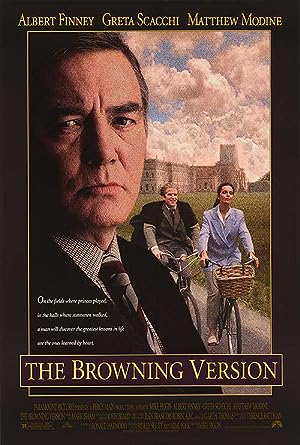 1 review for The Browning Version 1994