Francie and Joe live the usual playful, fantasy filled childhoods of normal boys. However, with a violent, alcoholic father and a manic depressive, suicidal mother the pressure on Francie to grow up are immense. Unfortunately, one tragedy after another, Francie’s world sinks deeper and deeper into paranoia (directed mainly against Mrs. Nugent, a nasty neighbor) and fantasy (where he has visions of the Virgin Mary).

This film is as shocking and horrific as it was funny and touching. In a world of many heartless films that are shallow, annoying, and predictable or insensitive and too dramatic, this movie balanced all it’s elements wonderfully. It’s a tale of Francie Brady, a young Irish lad in the early Cold War, who at first has a lot of playful mischief and a deep heart for those closest to him. Yet as the film progresses so does the Francie’s problems and so does the darkness within him as he tries to hold on and protect what little he was born with. His drunken father, who has a great knack with the trumpet, loves his family but his pain seems to override his tenderness. His mother is caught in the struggle of being a good mother and fighting her own inner demons, which ultimately consumes her. Francie invests much of his faith into his best friend Joe, a calmer but good-humored boy. But even the deepest of friendships suffer from the pressure of society, as Joe abandons Francie for a more conforming lifestyle. As all of Francie’s allies leave him, insanity and anger take over his mind. He plunges into a life a wild and frantic searching and destruction. He takes out much of this anger on a critical and harsh neighbor, in a gruesome scene (which is funny considering how it differs from most of the Hollywood bull). Francie’s escapades lead him to hospitalization. We then meet the adult Francie years later as he is released. We see the eager boy who grew into a lunatic and now has settled into a state of sad yet conventional behavior, but a good old friend (which was once a part of his insanity) comes back to comfort him. This film may be eerie and unconventional but that is what adds to it brilliance and fantastical charm. Viewer Note: I’ll never look at a pile of cabbage the same way again 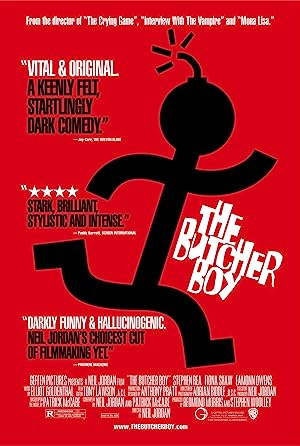 Be the first to review “The Butcher Boy 1997” Cancel reply