William Hundert is a passionate and principled Classics professor who finds his tightly-controlled world shaken and inexorably altered when a new student, Sedgewick Bell, walks into his classroom. What begins as a fierce battle of wills gives way to a close student-teacher relationship, but results in a life lesson for Hundert that will still haunt him a quarter of a century later.

I can’t help feel bit jealous when ever I see Private Schools in movies. My high school was unfortunately full of teachers who didn’t give half a goddamn about you. And it was/is one of the most respected (read pretentious) in the country. I never learned one single thing that was actually of use to me and I believe going to such a place is mostly responsible for turning me into the faithless cynic that I am now.

In this movie Kevin Kline (a seriously underused actor) plays a history teacher who is dedicated to making sure his students grow up to be fine and morally sound, upstanding people. They all get along until Sedgewick Bell (Emile Hirsh)the hell-raising son of an arrogant Governor arrives in class. His grades are terrible but Mr. Hundert sees intelligence in the boy and struggles to push him in the right direction at the expense of the rest of the class who actually want and care for education. Over the years he comes to regret his mistakes but sees a chance to put things right again with a reunion of all his former students organised by Sedgewick who appears to want to put things right.

There are loads of Student/Teacher movies out there but what separates The Emperor’s Club from the likes of Dead Poet’s Society and Mr. Holland’s Opus is that Mr. Hundert’s teaching is never in doubt. But he is flawed. Kevin Kline is so good in the role that for most of the film I thought I was watching a real person and not a character. And doesn’t he sound like Niles from Frasier?

I do wish I went to somewhere like St. Benedicts or at least had a teacher like Mr. Hundert. It seems that teachers who really care only exist in the movies As are students who are willing to learn. Or perhaps it’s just my bad non-education that skews my opinion. Still, I know good movies when I see one and The Emperor’s Club get’s my recommendation if you’re sick of Hollywood, massive budgets, overblown SFX and intrusive marketing and just want a good character drama. 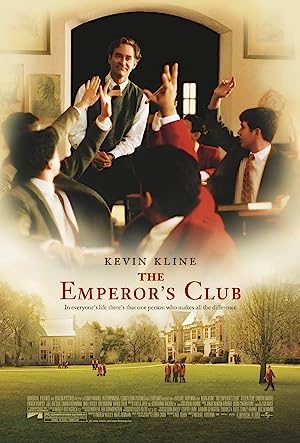