Following his mother’s death, Mark is sent to Maine to visit his aunt and uncle while his father goes on a business trip to Tokyo. Mark meets his cousin, Henry, and the two quickly form a friendship. However, Henry begins to show signs of violent behavior that worry Mark.

This is one of my favorite movies. Macaulay Culkin was excellent in this. The Good Son is about Mark(Elijah Wood), a young boy suffering in the recent loss of his mother, going to visit his aunt, uncle, and two cousins in Maine while his dad takes a business trip to Tokyo. Cousin Henry Evans(Macaulay Culkin) is Mark’s age and they soon become good friends and have loads of fun each day, but soon Mark starts to see another side of Henry when they start putting some of Henry’s ideas into action, including throwing a dummy called Mr.Highway over an overpass that causes a huge multi car wreck and a big smile on Henry’s face, and shooting a dog with a homemade gun. Mark starts to think Henry deliberatly tried to kill his liitle brother years ago, and is plotting to kill the rest of the family. This movie is a bit disturbing, but good all the same. 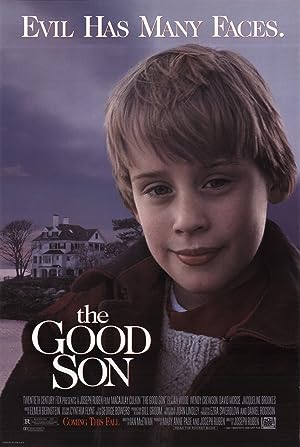