The Heart Is Deceitful Above All Things 2004

The dysfunctional twenty-three years old Sarah takes her six year old natural son Jeremiah from the home of his beloved foster parents with the support of the social service to live with her. Along the years, the boy shares her insane and lowlife style and is introduced to booze and drugs and mentally, physically and sexually abused by Sarah, her lovers and her religiously fanatic family.

Downright depressing. I watch films to escape or to see the joyousness of life – basically this is about child abuse. We all know what that is

and the adults who do it are downright ILL. For that reason, this

film is brilliant and depicts the mental illness in adults very well – and their inability to connect with their own compassion and understanding. Makes you realise that just because a person can have a child, doesn’t mean they are a parent. Throws up the whole notion of family and how damaging it is for some people.

If anything this film could be used to force EVERYONE to take a parenting course and to be observed and examined in the action of parenting.

It was realistic – but sad, depressing and well, if you are in the mood of getting depressed, watch this one.

I was really wanting to see what the kid turned into as an adult. Just another junkie?? It leaves you dissatisfied completely in that respect. 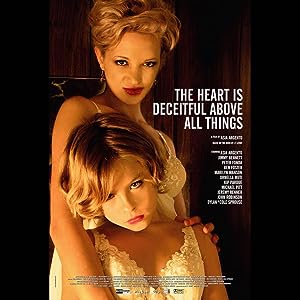 1 review for The Heart Is Deceitful Above All Things 2004