Precocious Claudia and her brother run away from home and hide in the Metropolitan Museum in New York.

I loved E. L. Konigsberg’s book, From the Mixed-Up Files of Mrs. Basil E. Frankweiler. It is one of a few books that I remember fairly vividly from childhood, and I recently read it with my son, so we decided to watch this movie. I liked the movie, and thought that the children and Ingrid Bergman all gave fine performances. However, the movie differs from the book on minor details that I could see no rationale for changing (saying that Mrs. BEF lived in New Jersey, rather than Connecticut, for example). Mainly, though, I was very disappointed in the way the story ends in the movie in comparison to the book. In the book, Mrs. BEF gives the children a time limit and lets them figure out the answer to the mystery themselves. But in the movie, Mrs. BEF leaves Jamie playing cards with her butler, while she takes Claudia to another part of the house, where Mrs. BEF essentially solves the mystery for Claudia. I would still recommend the movie, but it’s not nearly as good as the book. 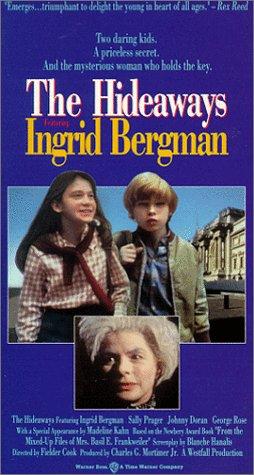 Be the first to review “The Hideaways 1973” Cancel reply