The siblings Noah and Emma travel with their mother Jo from Seattle to the family cottage in Whidbey Island to spend a couple of days while their workaholic father David Wilder is working. They find a box of toys from the future in the water and bring it home, and Emma finds a stuffed rabbit called Mimzy, and stones and a weird object, but they hide their findings from their parents. Mimzy talks telepathically to Emma and the siblings develop special abilities, increasing their intelligences to the level of genius. Their father becomes very proud when Noah presents a magnificent design in the fair of science and technology, and his teacher Larry White and his mystic wife Naomi Schwartz become interested in the boy when he draws a mandala. When Noah accidentally assembles the objects and activates a powerful generator creating a blackout in the state, the FBI arrests the family trying to disclose the mystery. But Emma unravels the importance to send Mimzy back to the future.

This was a very well written film about two young and quite brilliant children. They have a frantic mother and a somewhat aloof father. But the story ties them together well. If you are expecting this to be a simple film for the young,you will be disappointed. My children loved it. The mathematics and science are brilliantly weaved into this story of everything good and pure about us, or rather, what could be. E.T. for a new generation? It really could be. I have seen where some have said that children might be a bit bored with this movie. The theater I was in wasn’t full of bored children. The children I saw were on the edge of their seats; as was I. 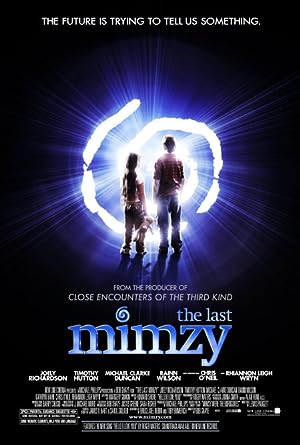