Home » Movies in English » The Lost Medallion: The Adventures of Billy Stone 2013

The Lost Medallion: The Adventures of Billy Stone 2013

Archaeologist Dr. Michael Stone looked for the lost medallion his entire life, and now his son Billy has taken up the search. Amazingly, the medallion ends up in Billy’s hands and a spontaneous wish in a precarious situation takes him and his best friend Allie back 200 years to what they realize is a very different Aumakua Island. When Billy and his friends are not jumping off waterfalls, avoiding animal traps, crossing the ocean, sneaking through caves or escaping a prison, they’re facing their nemesis Cobra, who wants nothing more than for them all to disappear. With no other way to get home, and the well-being of the entire island resting on his shoulders, Billy must discover the key to reclaiming the medallion and its tremendous power. One way or another, this adventure will change Billy and life on the island forever.

This film is basically a fantasy story, which is sort of awkward for a Christian Film. Contrary to what some people may think, Christian films generally portray things that can happen in real life, and not fantasy items like a magical medallion. But the makers of this film came up with a unique solution to this problem, it’s set in a real life scenario of a man visiting an orphanage and telling the kids a story that’s just pretend to teach them some lessons. The majority of the film consists of this story he tells. This is a great concept that I think more Christian film makers should try, it makes it possible for a fantasy story to work as a Christian film.

The movie is sort of unbalanced in a number of ways. Some parts are very exciting, while other parts are kind of boring- at least after seeing it a few times. It’s hard to say what age group it’s meant for. Some parts are rather violent and scary, while other parts are more like what you’d see in a cartoon- sometimes bad guys get knocked out by just a little punch, which is sort of pathetic. Some of the fighting is pretty well done, but not all. There are also a couple times in which it almost seems like some clips are missing- at one point they’re on a chase in the forest, then suddenly they’re in town.

Despite a few issues, overall it’s a pretty good film, and a great concept. It’s neat that the character who tells the story is played by Alex Kendrick. They couldn’t have found a better person on earth to play this role. This was actually what got me interested in seeing it- his movies are beyond outstanding, and it’s great that he’s now starting to appear in other good films. 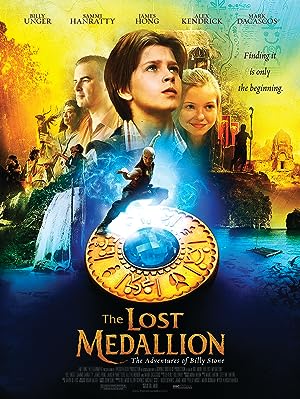 Be the first to review “The Lost Medallion: The Adventures of Billy Stone 2013” Cancel reply