An eccentric and dogmatic inventor sells his house and takes his family to Central America to build a utopia in the middle of the jungle. Conflicts with his family, a local preacher and with nature are only small obstacles to his obsession. Based upon a Paul Theroux novel.

Harrison Ford stars as an inventor named Allie Fox, who leads his wife and four young children into the wilds of Central America (Belize here, Honduras in the novel) to get away from Western civilization, where people eat too much of the wrong things, anesthetize themselves with cheap entertainment, and are lulled to sleep by the falsities of materialism and Christianity.

Allie is better than that, of course, and so he plunges himself and his family into a jungle clearing beside a river. There they create a rustic utopia they can call their own, complete with a giant ice machine that works from internal combustion fueled by ammonia hydroxide. For a while they enjoy the simple life, complete with air conditioning and pedal-powered laundry machine. But paradise can be easier to attain than it is to maintain.

Ford obviously wanted to sink his teeth into some deeper material after the success he had in so many popcorn classics. He was coming off his best performance, in “Witness,” and took that film’s director Peter Weir along for the river run. You have to give Ford credit for seeking such challenges at the apex of a profitable career, and he does a good job with the character in the script. But the script presents more of a star vehicle for Ford’s ambitions than anything worth viewing on its own merits.

It’s funny that reviewers like Roger Ebert slammed this movie when it came out because Ford’s character was unbearable. Allie Fox in the novel is unbearable, which is why the book is so good. He pushes and pushes his family and punishes them for their devotion. Even before making landfall in Central America, he goads his oldest son, Charlie, to climb a ship’s mast and swing from the rigging. He rags on Charlie constantly, without reason, and is a thorough misanthrope, albeit often compelling as portrayed in the novel by Charlie’s narration and author Paul Theroux.

But Fox in the movie is not so unbearable. We see Fox and his son, played by River Phoenix, share laughs and backslaps. He hugs and jokes with his wife, “Mother,” played by Helen Mirren. Fox in the book is a dark man who spews insults at people, or makes loaded comments and then excuses himself with a terse “Just kidding.” Ford imbues him with a sense of humor, an air of reasonableness, and squares off with antagonists who are truly nasty rather than ambiguous targets of Fox’s hostility.

Ford maintains Fox’s sense of idealistic contempt with Western civilization, and has fun with the many rants Fox throws up. A nice scene shows him going on about something as he starts a chainsaw, continuing to talk as the saw’s roar drowns him out and not noticing. But a lot of the time Ford presents us with a beautiful dreamer, and the central idea of the story, that Fox is quite a dangerous man, is lost.

The result is a picture that lacks something the novel has, a sense of depth that gives perspective to the suffering we witness. The story in the book is Charlie’s discovery of his father’s selfish, dangerous heart. In the movie, it’s more like: Why do bad things happen to courageous idealists? After a while, you start to glaze over from it all, and “Mosquito Coast” becomes an ordeal without a point. 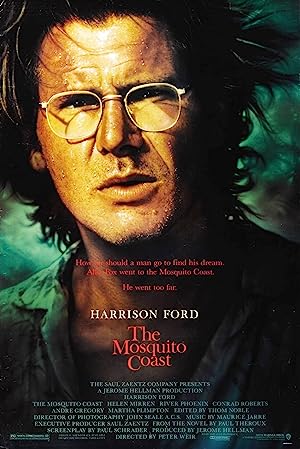 Be the first to review “The Mosquito Coast 1986” Cancel reply