A young gay man tries to balance his career as a personal assistant while searching for love.

We went last night to by far the funniest new film of the year so far, THE MOSTLY UNFABULOUS SOCIAL LIFE OF ETHAN GREEN, an R rated (a few decades ago it would have been considered an X) release drawn rather brilliantly from a not-so-brilliant but long running comic strip in a number of “alternate” publications.

I was never a big fan of the strip which was crudely drawn and heavy handed in conception – or so it seemed in the papers and the several compilation books published – but on screen at New York’s Quad Cinema, the characters are almost *perfectly* cast to resemble more attractive versions of the cartoon characters and screen writer David Vernon has been given latitude to smooth out and improve on the hilarious conundrums in Generation-X Ethan’s self destructive social life (finding an intriguing blend of lots of sex but all too little satisfaction).

In some ways, this is a gay-male version of SEX AND THE CITY: whenever Ethan finds an almost perfect mate, you KNOW he will somehow screw it up (no pun intended). Right now, it’s being marketed to a largely gay audience, but it’s so well written and directed (feel-good date movie, “independent” variety), it should cross over to a much wider audience and deserves to do for the actor playing Ethan (Daniel Letterle from CAMP!) what BILLY’S Hollywood SCREEN KISS did for “Will & Grace’s” Sean Hayes.

The grand farce scene where ALL the romantic threads (including, in addition to the above, an ex-football pro, a landlord ex-lover, a Log Cabin Republican fiancé and Ethan’s lesbian roommate) come together in the house where Ethan is trying to carve out a coherent love life tops one great laugh with another as if Feydeau-plotted and will have you howling.

Silly, sunny summer fun, and *highly* recommended to straight and gay alike open minded enough to laugh at a very funny but true look at how the other half (or at least a goodly younger part of 10%) loves. Stick around after the fine double ending for the playing cards from the plot significant “Dream Date” board game scattered through the credit “crawl.” Its a device that hasn’t been used as well since FERRIS BUELLER’S DAY OFF. 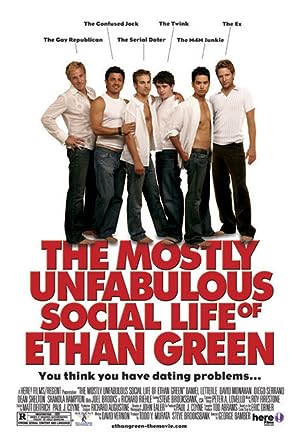