Home » Non-English with Subtitles » The notebook 2013 with English Subtitles

The notebook 2013 with English Subtitles

Twin siblings enduring the harshness of WWII in a village on the Hungarian border hedge their survival on studying and learning from the evil surrounding them.

The Hungarian film directors are often consumed up in photography and do not care of the story. Thanks God, not here. Agota Kristof’s Le Grand Cahier has such a strong storyline that it cannot be destroyed. However attempt to do so can be detected here.

I hope that after a while all directors learn that a book itself is not a script, they can use movie to tell the story, even leaving out some key elements of the book.

Some scenes cry that were shot on the same streets, same interiors.

But this is it, that’s why I gave only 8/10, as the film works. It takes you to a journey where you forget your soda and popcorn and step out to the real word afterward a bit changed. You know that it can happen. As in the summary, the circumstances can bring out the evil from everyone. Even 10 year old boys. We know this since the Lord of the Flies, but it is good to be remembered to it from time to time… 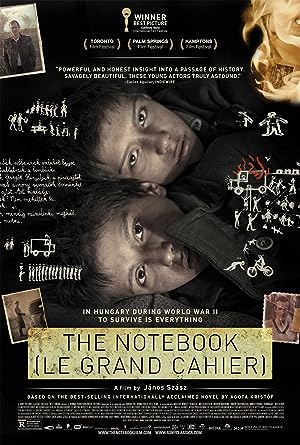