Based on a true story. In 1957 a rag-tag, shoeless, poor group of kids from Monterrey, Mexico shocked the world by winning 13 games in a row and the Little League World Series in the only perfect game ever pitched in the Championship. These kids, led by their priest and a down-and-out former major leaguer embark on a journey through the southern US and up into Williamsport, PA for the Championship game. They encountered many adversities including nearly being deported and the bigotry that wouldn’t allow them into certain restaurants or travel on certain buses. They never lost their faith and eventually captured the hearts of both nations. This is a heart-warming inspirational story in the tradition of “Rudy”, “Hoosiers”, “Coach Carter” or “Friday Night Lights”.

I knew of the story before I saw the movie. I am old enough to remember when the ambidextrous pitcher did his thing. But the movie was more than that. It says much about baseball but even more about how far we have come and need to come. White only bathrooms. Great kids and even Cheech playing a priest. At times I was crying, times I was smiling and yes times I was cheering. A great family movie too.

The story is about the Monteray Little League team put together with little fanfare and no grass. Although they are small they are fierce competitors. They go north to battle for their baseball honor and as they go north they win the hearts of so many people. And when they get to Louisville they even meet Cool Papa Bell. It was a great moment (if true). 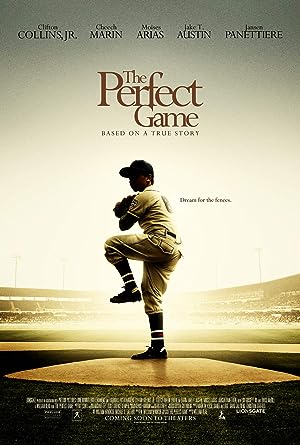 Be the first to review “The Perfect Game 2009” Cancel reply