Greed, corruption, ignorance, and disease. Midsummer, 1349: the Black Death reaches northern Germany. Minstrels go to Hamelin for the Mayor’s daughter’s wedding to the Baron’s son. He wants her dowry to pay his army while his father taxes the people to build a cathedral he thinks will save his soul. A local apothecary who’s a Jew seeks a treatment for the plague; the priests charge him with witchcraft. One of the minstrels, who has soothed the Mayor’s daughter with his music, promises to rid the town of rats for the fee. The Mayor agrees, then reneges. In the morning, the plague, the Jew’s trial, and the Piper’s revenge come at once.

Donovan sings three songs :outside the wonderful “sailing homeward”,he performs two ditties “I’m the pied piper” (obvious) and “life has her (!) ups and her downs”.It was filmed on location in Germany

“The pied piper” ,like “Peau d’âne” which was released the year before, is a fairy tale ,but the mood is drastically different:I would say that “peau d’âne” is a movie for children that can appeal to adults,and “the pied piper” a movie for grown -ups which can appeal to children.”Peau d’âne” is the bright Renaissance,with its châteaux de la Loire such as Chambord,and the forest and the country are not hostile,it’s a providential world.”The pied piper” is the dark Middle Ages;the beginning might have been influenced by Bergman’s “the seventh seal”:the wandering entertainers ,the plague ,the “sorcerer” …The screen play is almost an original one:the famous legend lasts barely ten minutes ,the rest of the plot is completely new and extremely pertinent.

Two worlds clash in Demy’s work: the world of Melius the jew,that of an embryonic science and a desire to explain the things and to react to them:he comes much too soon and anyway the Jews suffered persecutions in those troubled times too:think that Louis IX,King of France of the thirteenth century ,forced the jews to wear the “rouelle”,a sinister ancestor of Hitler’s yellow star.And he became Saint-Louis, canonized by the Catholic Church.

And there’s the world of the bishops,sinister characters dressed in red,red as blood,who personify intolerance and ignorance :unlike Melius,they react to the bubonic plague by saying it’s a God-sent ordeal,because men are sinners,they do not have to understand but they must be ready to repent and to mortify (self-flagellation).The wedding is revealing as well:listen to the bishop,the way he speaks to the bride:she is an impure human being,whose only way is to follow her husband’s rule:till 1215,woman had no soul!

Demy expresses his disgust with the famous scene of the wedding cake: big rats appear,they had entered the cathedral-pastry.It won’t be long before the magnificent dessert crumble .And it will not be long before Hamelin itself and its hypocrite priests crumble like Sodom .So the pied piper is like God’s angel ,leading Lot out of this doomed place.The children are the just men,sometimes sacrified as Hurt’s unfortunate bride ,a child herself -a girl used to get married at an early age in those ancient times.

Demy ‘s pessimism,which passed for melancholy in “Lola” , muted in “les parapluies de Cherbourg”,seemed to disappear in “les demoiselles de Rochefort” and “peau d’âne”, is glaring in “the pied piper”.This is probably his darkest work.Thus ,one can forget his return to the ponderous comedy with Deneuve and Mastroianni in 1972″.

“The pied piper” remains an overlooked,ignored work.How many Demy’s fans do not even know that this film exists?I urge them to see it,it’s an essential part of his work,and maybe his swansong,because he was never to reach such heights afterward. 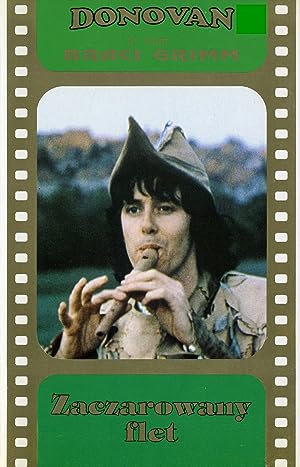 Be the first to review “The Pied Piper 1972” Cancel reply