An English boy, living in Africa during World War II, through his boxing prowess, becomes a symbol of hope, in a time of war.

This is the best film I have ever seen. I read the book in 1989, which I enjoyed so much. It was emotional, real and I raved about the book to anyone near me. So much so, that my fiancé took me to our local cinema during a festival to see the film in 92. For those that have read the book, all I wanted to know was how were they going to do the chicken scene?

However for those of you that haven’t read the book, the chicken scene did not matter. For once a film is so fantastic, that you cease to compare it to the book. I enjoyed this film, in a cinema with fewer than fifteen people in. I laughed and cried and it was so sad that no one had made the effort to come and see this masterpiece.

Years later, when I talk about the film, people say ” Oh it’s the one about the boxer” but it is so much more. If you think this is a boxing film, think again. It is a film about love, about being different , about perseverance and about not only wanting to make a difference, but doing so. It shows that you may be a small fish, but you can make a difference to the world if only you believe in yourself.

Morgan Freeman is just fantastic in this film. As is Stephen Dorrf. For Morgan, it is on par with Shawshank Redemption and beats performances in anything he had done written by James Patterson. I was so chuffed recently when seeing Enduring Love, with Daniel Craig, I realised he was PK’s enemy Jaapie Botha in the film from 13 years ago. I am lucky to have The Power Of One on video and I wait for the day when it is released again on video or DVD and I can purchase it for friends to watch. You cannot watch this film without getting something positive out of it. I have since parted with the chap I first watched the film with, but have married a man born in South Africa who appreciated this film as much as me. I only hope and dream that one day, we together, we will make a difference. If we touch on PK’s achievements I will feel I have succeeded. 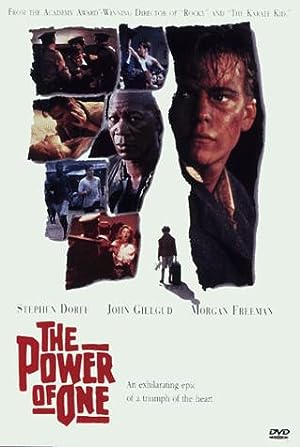