A young boy tries to cope with rural life circa 1950s and his fantasies become a way to interpret events. After his father tells him stories of vampires, he becomes convinced that the widow up the road is a vampire, and tries to find ways of discouraging his brother from seeing her. He must deal with an abusive mother, a father with a charge of molestation, a band of youths creating havoc, and an unforgiving environment in general.

Jeremy Cooper plays Seth Dove, an impressionable and imaginative youngster living in the American prairies of the 1950s. He comes to believe that a mysterious local English widow named Dolphin Blue (Lindsay Duncan) must be a vampire, based on what his father Luke (Duncan Fraser) has related to him. (The old man is a fan of pulp novels.) Therefore, Seth becomes alarmed when his older brother Cameron (Viggo Mortensen), a military veteran, falls in love with the widow.

“The Reflecting Skin” is a striking, unusual film, marking the filmmaking debut for Philip Ridley, a British playwright, author, and screenwriter. It’s definitely not to all tastes, and certainly not for people expecting a traditional horror film. It depicts a stark world, seen through this childs’ eyes, in which adults are often extremely messed up and children are victimized. Ridley’s dialogue is literate and amusing, and the actors do seem to be enjoying themselves reciting these lines. The atmosphere is very impressive, with Ridley taking advantage of all these open spaces and endless fields of yellow. Dick Pope did the very efficient cinematography. Another memorable element is the music score by Nick Bicat. It’s haunting and helps to draw you into this story that is sure to get under the skin of some of its viewers.

Fans of Mortensen should be aware that he doesn’t show up for over 40 minutes, but he provides an engaging presence as a young man with little patience for his kid brother. Duncan is absolutely amazing and her character truly does seem to be living in some other universe. Sheila Moore chews the scenery as the shrewish Dove mother, Canadian character actor Fraser is fine as the father with a grim, sordid past, and young Cooper offers a believable performance.

Consistently unpredictable, “The Reflecting Skin” does have a fair bit going for it, and it’s worth a look for buffs searching for something different and interesting. 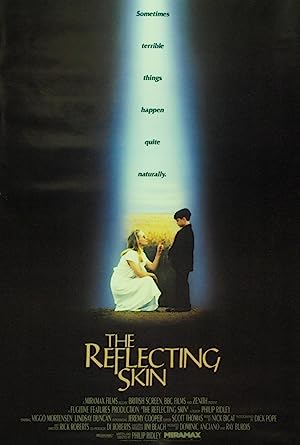 Be the first to review “The Reflecting Skin 1990” Cancel reply