A series of overlapping stories about four suburban families dealing with different maladies. Esther Gold’s life is consumed by caring for her comatose son; Jim Train is sent into a tailspin when he’s passed over for a promotion; Annette Jennings’ family is struggling in the wake of her divorce; Helen Christianson is determined to shake up her mundane life.

Rose Troche certainly can’t be accused to sticking to the same sort of film. This one is a complete contrast to `Bedrooms and Hallways’, which was a pleasant gay romantic comedy and `Go Fish’, which had a gay theme but was truly weird. The multiple storylines and cross-cutting are rather Altman-esq but the stories are tied together as in `What’s Cooking’. In fact, it’s a drama on the same template. We have four households (and one other guy) all tied together by the hands of fate.

Although there are some good lines, it’s rather a dour film with a jaundiced view of American suburban society (though filmed mostly in Toronto). People are obsessed with their work or their children and seem to receive little happiness from either. In the case of Glenn Close’s character Esther Gold she has an uphill battle since her once lively teenage musician son is now in a coma. She cares for him meticulously, constantly talking to him, convinced he will return to consciousness. The children are also dissatisfied with life, or have escaped into their own fantasies (one pre-pubescent lad is conducting an affair with a barbie doll), despite the affluence and parental attention. There is a resonance here with `American Beauty’, but not the same lyrical camerawork.

Glenn Close, as the coma boy’s mother who enters an endurance contest to appease her aggrieved daughter, is as good as she has ever been, with a kind of understated desperation that expresses perfectly her character’s feelings. Patricia Clarkson is also a stand-out as Annette, a recently divorced woman, traded in by her air-head husband for a newer model, who battles on to look after her children, while trying to find some comfort for herself in the bar scene. Jessica Campbell as the daughter gives us a good picture of an angry teenage brat. The men, on the other hand, don’t stand out, except perhaps Randy the pool guy (Timothy Olyphant), whose good looks take on a sinister aspect when he becomes involved with Sam, Annette’s tomboyish daughter. Dermot Mulroney as Jim Train, a work–obsessed lawyer is curiously flat, though Moira Kelly curls her lips nicely as his aggrieved wife.

This could have been a gothic tale, but Troche keeps the story to a fairly mundane level, as befits the suburban landscape. I think American suburbia will hate it – far too drab, commonplace and close to the bone. `American Beauty’ got away with it because it was so pretty, and Lester and his family really were a bit odd. There’s nothing odd about these people – they are just as colourless and inadequate as the rest of us. I notice Roger Ebert thought them unlikeable. No, they’re just ordinary. 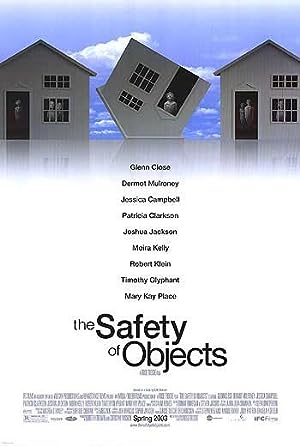