Storyline:
The story of a man who returns to the sea where he spent his childhood summers in search of peace following the death of his wife.

Max Morden (Ciaran Hinds) has lost his wife Anna (Sinead Cusack) to cancer, and tries to compensate by staying at a lonely hotel presided over by Miss Vavasour (Charlotte Rampling). During his childhood, he stayed there with his family, when the hotel was a large house with chalets attached; he stayed at the chalets, and befriended the family of a husband (Rufus Sewell), wife, two children and their “minder” Rose (Bonnie Wright). The older Max spends much of his time recalling that period, while at the same time reliving his last days with Anna. He feels a terrible sense of loss: during his childhood he experienced the first pangs of love and death – feelings that were repeated when cancer claimed his wife. Photographed in atmospheric colors by John Conroy – bright for the childhood sequences, dark for the present-day moments involving the aging Max, THE SEA is a poignant meditation on the complexities of the past. However much Max might have wanted to change what happened, all he can do is to relive it in his mind; sometimes it has the habit of repeating itself (as seen, for instance, in the last exchanges he has with Anna before she passes away). Stephen Brown’s narrative unfolds at a slow pace, with plenty of close-ups of the adult Max’s tortured face as he tries – and fails – to cope with his loss. The three-leveled plot – childhood, Anna’s death, and the adult Max in the hotel – seems a little complex at first, but resolves itself at the end when we discover the true identity of Miss Vavasour and the mysterious pseudo-military man Blunden (Karl Johnson), the only other guest staying at the hotel. Some of the individual sequences are almost achingly poignant, especially the moment where Max lies on the beach next to the seashore in a vain attempt to commit suicide. Shot on a low budget, with a screenplay by John Banville (from his own novel), THE SEA offers a convincing insight into the mind of a tortured soul. 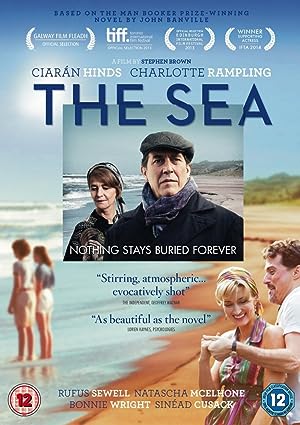 The Sea (2013)
86 min|Drama|18 Apr 2014
6.0Rating: 6.0 / 10 from 293 users
The story of a man who returns to the sea where he spent his childhood summers in search of peace following the death of his wife.
Director: Stephen Brown
Creator: John Banville (novel), John Banville (screenplay)
Actors: Ciarán Hinds, Sinéad Cusack, Joe Gallagher, Karen Scully

Be the first to review “The Sea 2013” Cancel reply