After the abduction and presumed death of Mackenzie Allen Phillips’ youngest daughter, Missy, Mack receives a letter and suspects it is from God, asking him to return to The Shack where Missy may have been murdered. After contemplating it, he leaves his home to go to The Shack for the first time since Missy’s abduction and an encounter that will change his life forever.

This is a wonderful family film. Here’s a tip for Hollywood. My friend and I go to a matinée pretty much every week. There are sometimes, at most, a dozen, sometimes a half dozen, people in the theater. For this one? The room was a good half full. Now tell me why Hollywood insists on producing nasty, foul, poorly-written and acted pieces of trash all the time? Really. Anyway, this one gives you so much to think about. There are several instances of symbolism in this picture that took my breath away, that brought me to tears. Well written, well-acted, this one is so worth seeing. I am anxious to see it again and trust me, that isn’t often the case. I took away from that theater a new feeling and I’ve thought about several of the lines of dialogue many times since. The truth and the trust of this picture will stay with you. I know it did me. I am always surprised by Tim McGraw. The man can surely sing, but he can also act. He’s a natural. Octavia Spencer seems to be in about every movie there is lately – well, not quite but still – however, there is a reason. She is wonderful. She brings her role to life every time. And she most certainly did in this one. Trust me, this is one you want to see. Take your family. Take your friends. Or go alone. Doesn’t matter. Just see it. 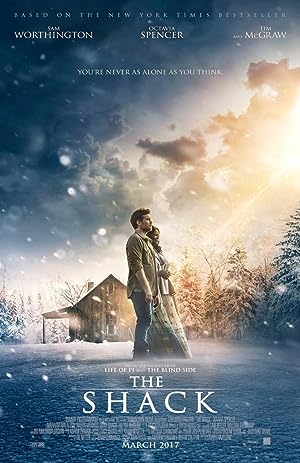 Be the first to review “The Shack 2017” Cancel reply