Michael Hunter’s lovely, beloved 17 year-old son Kyle committed suicide, although he was in therapy for depression. This ruins Michael’s marriage, his daughter Shelly moves in with her mother. He stops treating patients in order to write and teach Psychotherapy, until many years later when a student gets him fascinated by the case of Thomas ‘Tommy’ Caffey. He was about to be released at his 18th birthday from the closed ‘boys school’ he was placed into after his father, Joseph, was put into jail for beating his adulterous mother to death. Michael feels that Tommy carries a big chip on his shoulder, ignores that Shelly fell for him at first sight, but is mesmerized by Tommy’s resemblance (purposefully enhanced) to Kyle. There is also a revealing meeting with Tommy’s dad in jail.

There are many kinds of thriller/drama movies.

Some have the ability to confuse and bore you to death during most of the time, with just some good twist in the end, which “should” compensate for the “lentish”, sacrificing hour before that. And many overrated movies have that formula, which only works because you become so numb as you watch it, that you feel very surprised by the final outcome of the plot, and then believe that it was such a terrific film.

Others are the exact opposite, meaning that they have a great starting point, but the story gets duller and duller until the final result becomes very predictable. And so many other variations of this genre may arise.

With `The Unsaid’, however, you can expect to be tied to your seat the whole time as the plot develops. It has a dramatic starting point, a powerful and constant *thrilling* middle section and well, I won’t refer the ending because, believe it, if you start watching this flick, you won’t go away until you see the whole thing. It’s that good! But that’s me, I personally like movies that grab your attention from the start and make you not even take bathroom breaks or answer to your cell-phone calls. What about you?

The acting by Andy Garcia was brilliant; he really got inside his character. Only with a role like this could he show his true dramatic acting skills, and was followed very well by the rest of the cast. The directing was ok, and had some notorious influence on our understanding and dramatic effect of the scenes. It was done the way it’s supposed to, clean and sober, even in action sequences. I won’t refer to the story or the subjects it’s about, since none of that is necessary here. This is a review, not a `plot outline’.

The bottom line is this: it’s a definitely worth watching film! And if you’re not entertained during and pleased after it, well. admit it: You watched some movie other than `The Unsaid’. 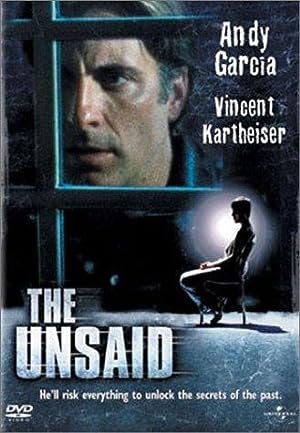