Director Ralph Fiennes captures the raw physicality and brilliance of Rudolf Nureyev, whose escape to the West stunned the world at the height of the Cold War. With his magnetic presence, Nureyev emerged as ballet’s most famous star, a wild and beautiful dancer limited by the world of 1950s Leningrad. His flirtation with Western artists and ideas led him into a high-stakes game of cat and mouse with the KGB.

The actors Oleg Ivenko and Chulpan Khamatova are excellent whereas Ralph Fiennes is magnificent with a masterful interpretation of Alexander Pushkin, with restraint and sensitivity. He literally impressed me! Nevertheless, as a director, Ralph Fiennes is less convincing. He excessively insists on the haughty and unpleasant character of Rudolf Nureyev, to such a point that we almost want to slap him. In addition, the manifold alternations between the trip to Paris in 1961 (the present time) and the flashbacks (his childhood in a poor family and his debut as a dancer) are almost disturbing. I would have appreciated that Ralph Fiennes develops these different points: 1) An evocation of the trip to Vienna in 1959, formerly Western Europe, followed by a formal ban on all abroad travel formulated by the Russian Minister of Culture, which could have explained, without justifying, the oppressive and stifling behavior of the KGB members, in Paris in 1961. 2) A less dark presentation of the Soviet Union reduced to KGB members as obtuse as omnipotent. Indeed, at the beginning of the 60s, the Soviet aura was supreme: culture, science, geopolitical influence, … For instance, the dramatic Nureyev’s defection at the Paris Le Bourget Airport happened just two months after the Bay of Pigs invasion which was a significant failure for Kennedy’s US foreign policy and a strong reinforcement of the relations between Cuba and the Soviet Union. 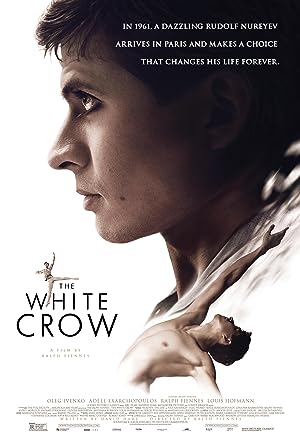 Be the first to review “The White Crow 2018” Cancel reply