Corey and Jimmy Woods are two brothers who are being separated due to their parents divorcing. Jimmy is a mentally unstable kid that has had problems ever since his sister died at a young age. One day, Corey discovers that Jimmy has a natural talent for playing video games. He is one of the best around, and the two journey to the West Coast to compete in a video game championship, but along the way, they must avoid the adults, who are trying to take Jimmy away.

Well, not really. My life story doesn’t resemble that of the characters in any way except for our collective love of video games. That said:

I watched this movie so many damn times as a kid it’ll make your head spin. What can I say about this movie that you don’t already know yourself? Fred Savage. Beau Bridges. Christian Slater. The chick from Rilo Kiley. Spanky.

And then Jimmy brings it all home.

First of all, I want to say that whatever pills the video game contest host was on, I want me some of that. Two, they should bring back the Powerglove. And three, road trip movies will never, ever die.

From Double Dragon to Ninja Gaiden or the nostalgic dinosaur park in the middle of no where, this movie will always remain a classic for me. 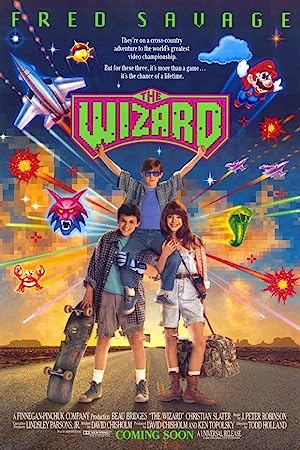 Be the first to review “The Wizard 1989” Cancel reply