Life really sucks for a group of gay and lesbian teenagers living in Los Angeles. Their parents kicked them out, they’re broke and bored, their lovers cheat on them, they’re harassed by gay-bashers. If things are going to be this way, maybe suicide isn’t a bad idea; at least not in the mind of Andy, our major protagonist, who gives the film its title by describing himself as “totally fucked up.”

I’ve been watching Gregg Araki’s movies out of chronological order and I think this has really adversely affected the way I’m seeing them. Being a big fan of the surreal, campy, pop art-y ‘Doom Generation’ and ‘Nowhere’ has meant that I’ve found his earlier more realistic movies difficult to enjoy.

‘The Living End’ is one of his more conventional movies but at least it attempted some character development and a story-line. Unfortunately, ‘Totally F***ed Up’ doesn’t have enough of either. It has plenty of anger sure, but it’s semi-documentary look at disenfranchised gay teens fails to hold the interest throughout. It has a few good moments, but overall I had to fight to keep involved.

The one really good thing about it is that it introduces the charismatic James Duval, who Araki would utilise better in his following two movies. Too bad his subsequent career has mainly seen him relegated to bit parts in (the no brainer) ‘Independence Day’ and (the admittedly enjoyable) ‘Go’. He deserves better.

So, if you didn’t find much to enjoy in ‘Totally F***ed Up’ don’t let it turn you off Araki completely. He far surpasses this in ‘Doom Generation’ and especially his most accomplished movie to date ‘Nowhere’ – a true 90s classic that deserves a larger audience! 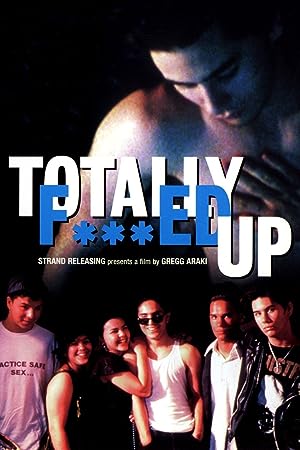 Be the first to review “Totally Fucked Up 1993” Cancel reply