A boldly original tale of sexual power, dominance and oddly enough, love, Twisted Romance tells of the explosive relationship between a fragile young man and his volatile 50-year-old lover. Brooding teenager Raxc3xbal (Oscar Gxc3xa9nova) and the rough-looking Roberto (Nehuxc3xa9n Zapata) meet and have an afternoon fling which turns sexually violent. Despite the age difference and the older man’s controlling nature, the two form an uneasy relationship. But when Raxc3xbal becomes involved with a fellow teen, the palpable sense of impending danger becomes even greater. Exploring the darker side of relationships rarely seen in contemporary gay cinema, Twisted Romance is a compelling drama capped with a shocking conclusion.

How interesting is that I find myself liking this Argentinian movie from an underground director about gay romance/sexual relation (starring the director of the film as one of the gay lovers, who happens to have a straight life or facade, as if to say, at the same time), even though the technical elements of the film itself aren’t the best. The film at times has certain sound problems, and the acting isn’t top notch, but at the same time it just feels real, every second of it, every burst of violence and just pure hatred and nasty things thrown here and there. It’s heartbreaking, and might be the first time that I don’t feel uncomfortable with this kind of movies. 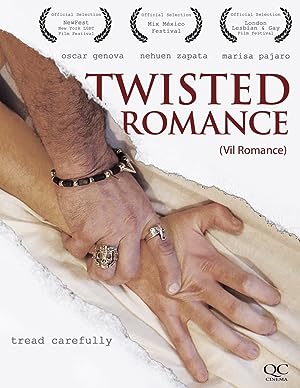 Be the first to review “Twisted Romance 2008” Cancel reply