The setting is a “new” Tokyo suburb. The school is clean, well run, and the movie takes place in the five-day period before, during and after a ferocious, seemingly liberating typhoon, which five of the students endure while marooned in the school’s gymnasium.

As the English title is apparently intended to emphasize, “Typhoon Club” is rather like a much more solemn version of John Hughes’s “Breakfast Club.” One young man, who’s obsessed by being and nothingness, is fond of making deep statements on the order of ”Death existed before life.” Two of the girls are disturbed by sexual longings they don’t yet undertand. Another young man has an alcoholic father with whom he lives in a shack on the edge of the suburb. One young woman runs away -briefly – to see Tokyo for the first time.

The narrative unfolds in a series of short, sometimes enigmatic scenes that have the effect of a series of simple declarative sentences. They describe the action without ever interpreting it. After a while, one realizes that there really isn’t an awful lot to interpret.

The students are less distinctively characterized than the settings they inhabit. At best they are mouthpieces for the writer, Yuji Katch, who evokes the memory of Yukio Mishima, and the director, Shinji Somai, whose often strikingly beautiful images are more interesting than the lives of the people being photographed.

I’ve saw this film on tv back in the eighties so I hardly remember the details but the story is about a young group of teens during their adolescence and their experiences with the opposite sex. While the class is in school a storm raises and they have to stay in school during the typhoon. The story is shown in a very picturesque and (typical Japanese) silent way and won a movie price especially for it’s unconventional kind. 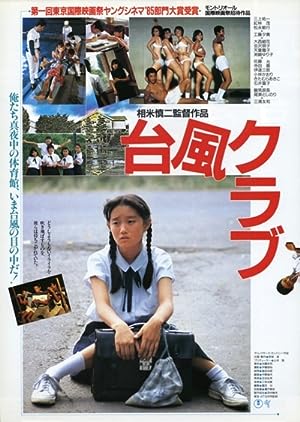