Two young French Jewish boys and their family struggle to survive the WWII and the invasion of Germans.

Nazi invasion of France was one of the saddest moments in European history.It was a period of anger,fear and hopelessness.For Jewish people,it brought a lot of humiliation and suffering which has been nicely depicted by famous French director Jacques Doillon in his film “A bag of marbles”/Un Sac De Billes.As there is no direct hint of sentimentality,this film appears to be truly authentic.Although there are some adults in this film,its primary focus is on young children especially two young boys who make good use of various schemes and tricks to escape being caught by Nazis.French writer Joseph Joffo’s memoirs “Un Sac de billes” serves as the basis of this film.The notion of “life is dear and precious to all” has been portrayed by him in order to show how these two kids renounce their Jewish faith in order to remain alive.Although it talks about a serious theme,it is the light tone of this film which makes it very interesting.”Un sac de Billes” is a film for viewers who would like to see young children behave in a more mature manner. 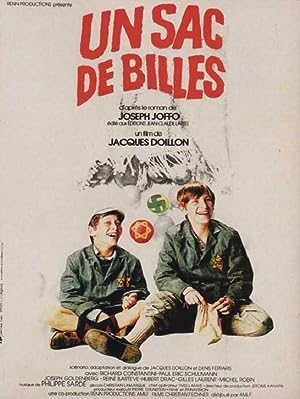