Jake Bouchard, a shy 17-year-old, has finally scored a date with the incredibly wonderful Angie. When Angie gets kidnapped, the truth about Grandpa comes out. In a last ditch effort to rescue Angie, Grandpa re-enlists “The Devil’s Scum”, his old special ops unit who band together with Jake to go on one last mission.

Most of us over 70 could not manage to work as hard as these guys did to produce this film. I asked my husband if he enjoyed the movie and he said he did. He is 75. Maybe the bad reviewers are too young and critical to appreciate a film about old people. It is not a great movie but it is also not a terrible one. Lower your expectations and sit back and enjoy a few old people jokes and the fact that 70 plus guys can actually make a reasonable movie. Caan is a good actor and he carries the film along with some help from his buddies. The two young ones do a reasonable job as well. They are older than the characters they are portraying. There are no earth shattering scenes or fast chases but the storyline is okay. It is about rescuing a damsel in distress by her boyfriend and his grandfather along with some aged buddies. There is no trick photography or devices used to make it faster paced or more exciting. Expect an okay movie and if you are over 70 it will help. 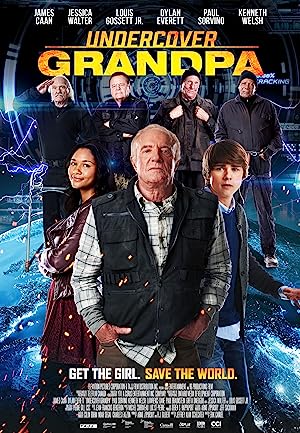 Be the first to review “Undercover Grandpa 2017” Cancel reply