“Valley of Bones” is a nail-biting adventure thriller set in the oil-rich Badlands of western North Dakota. Anna, a single mother and paleontologist, and McCoy, a meth-addicted oil worker, form an unlikely bond as they both struggle to make amends for their criminal pasts. Their hopes lay in the form of a monumental T. rex fossil, the discovery potentially worth millions. Anna needs this once-in-a-lifetime find to set both her career and her relationship with her son back on track. McCoy needs the money to pay off his debts to a local cartel boss and to save his own young daughter’s life. With their motivations over the bones pulling them in opposite directions, can Anna and McCoy trust one another or will they soon turn into adversaries themselves?

Filmed in Bowman, Amidon, and the surrounding N-Dakota Badlands. This film will engage any fan of westerns and film noir, and it is much higher quality then it’s low budget would suggest.

What I liked: *Locations are well shot and gorgeous(this local guy might be a bit bias) *Story is captivating and well constructed. *Characters motivations build naturally throughout the film. *Cinematography, the framing is very effective considering the budget.

What could be better: *A few scenes seem too dark for the time of day. *The shallow depth of field can be distracting for one or two scenes. *The tension from the snake feels like it went a little long to be realistic. *Occasionally the dialog is a bit rough, like it could of used one more script review to make it sound like natural conversation.

All in all while it has some issues inherent of low budget film making, the story and cinematography is solid and kept me on the edge of my seat. It is rated R so expect occasional roustabout levels of colorful language, and there is one scene in a “seedy” bar that does have a topless dancer in the background. 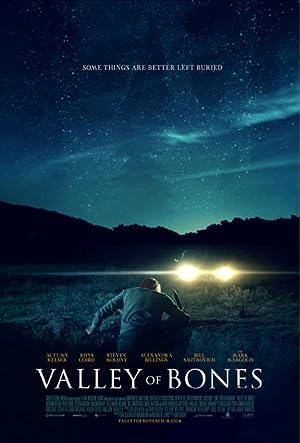 Valley of Bones (2017)
90 min|Crime, Thriller, Western|01 Sep 2017
4.2Rating: 4.2 / 10 from 424 users
A disgraced paleontologist struggling to raise her son is tipped off to a groundbreaking dig site in the Badlands by a recovering meth addict, but his tie to the cartel threatens to bury them both under the weight of their criminal pasts.
Director: Dan Glaser
Creator: Dan Glaser, Steven Molony, Richard M. Lewis, Jon Wanzek (story by)
Actors: Autumn Reeser, Rhys Coiro, Steven Molony, Mason Mahay

Be the first to review “Valley of Bones 2017” Cancel reply