Jasin and Caleb’s eternal bliss is put to the test when Jasin’s century old rival Demetrius returns to get his revenge. Demetrius plots to destroy Jasin by creating an army of vampires by recruiting unwilling victims from the local boxing gym for his new brood. In his quest for domination, he recruits Jasin’s ex, Tara, who is still quietly grieving from Jasin’s rejection. Power and passion collide when the two broods finally clash. Who will remain and who will be destroyed for eternity?

By the end of the first Vampire Boys movie, I had finally gotten used to how bad all of the actors were, and in fact had become quite fond of them. They were so bad that they were actually good. The original Caleb was especially annoying. Yet, I found myself strangely looking forward to the prospect of watching the sequel. I was particularly looking forward to seeing how awful Caleb would be this time around…

Unfortunately I’ll never know how bad the original Caleb would have been the second time around. It was a crushing blow to learn that Jasin and Caleb are played by different actors in the sequel. The new Jasin totally sucks. The new Caleb isn’t nearly as grating as the last one. He’s just cute and boring. I don’t understand why they bothered making this sequel when they couldn’t even get any of the actors from the first movie to come back (except the girl). Because of this, I found Vampire Boys 2 to be a huge disappointment. 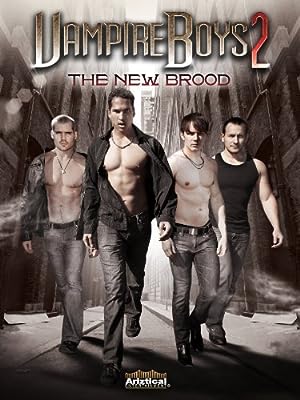