Two male graffiti artists are partners in their work, but they are also having a sexual relationship with each other which they haven’t disclosed to others. In the midst of planning a big job with some of their graffiti artist colleagues, that work to be painted on the side of a commuter train car, the two are having problems with each other based on what seems to be different things that they want from their personal relationship. The first man is more animalistic in that he wants their relationship to be purely sexual, whereas the second man has more romantic thoughts on his mind. Added to their obstacles is one of their females colleagues who seems to be attracted to the first man, who does not dissuade her. While each evaluates their relationship, one may come to the realization that what they want may be more similar than they had originally envisioned, but has to convince the other for their relationship to survive.

Vandals is a short film that was part of a collection of short films with a similar theme under the title “Protect Me From What I Want” This is one of the films that stand out, because it presents a really realistic relationship in a harsh murky urban-like environment. The main characters are Jonas Ullmann who plays Sebastian and Nils Althaus who plays Johannes. They’re a pair of graffiti artists in a gang, but they’re also hiding the fact that they’re a couple behind closed doors. Sebastian is the group picked leader of the graffiti gang, his image as a self confident ladies man means everything to him.

Johannes wants him to go out with him properly, but Sebastian just can’t bring himself to do that and makes excuses. Getting caught by one of their own doesn’t help matters either. It drives Sebastian towards a new female member who is an old friend of his. The gang are planning a train type spray paint piece, but Sebastian drops Johannes as his second in command. With their relationship on the line, Johannes is not a happy vandalising bunny. The cast fits well and the leads have chemistry. this film is well worth a look. 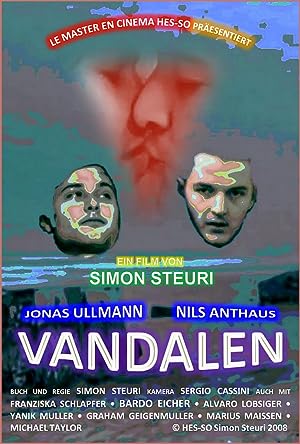 Vandals (2008)
17 min|Short, Drama|N/A
5.2Rating: 5.2 / 10 from 132 users
Two male graffiti artists are partners in their work, but they are also having a sexual relationship with each other which they haven't disclosed to others. In the midst of planning a big …
Director: Simon Steuri
Creator: Simon Steuri
Actors: Jonas Ullmann, Nils Althaus, Franziska Schlxc3xa4pfer, Bardo Eicher

Be the first to review “Vandals 2008” Cancel reply