Home » Foreign Movies without Subtitles » Versus 2019

Achille, a handsome Parisian teenager from a wealthy family, is the victim of a violent assault. Sent on vacation by the sea to rebuild, he meets Brian, an angry young man. From their confrontation will spring their true nature, from their struggle will be born a killer.

An artificial and tasteless conflict between young offenders and petty bourgeois, clumsily imitating the atmospheres of Taxi Driver (Martin Scorsese, 1976) and Scarface (Brian De Palma, 1983), but without the same talent undoubtedly. Everything is stereotyped and predictable, except the ending which is an excretion of madness and gratuitous violence.

Not to mention the deep and refined dialogues, vaguely inspired by a comedy from Molière, as the following scene elegantly suggests. Gabriel: ‘Did you see me smashing theirs faces?’ Achille: ‘No, I was busy getting sucked’. Then, Gabriel begins to pee in the swimming pool. Finally, Achille pushes Gabriel in the pool.

Despite a relatively neat photography and an obvious sense of aesthetics, I guess this movie is a teen challenge to appear in the Bottom 100 of IMDb. Nice try! 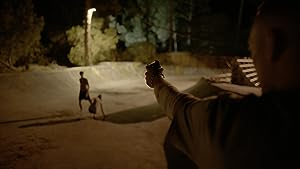