During the harrows of WWII, Jo, a young shepherd along with the help of the widow Horcada, helps to smuggle Jewish children across the border from southern France into Spain.

Parents need to know that Waiting for Anya is an adaptation of Michael Morpurgo’s same-named children’s novel about a Nazi-occupied French village in World War II. Based on a true story, it depicts the heroism of teen Jo (Noah Schnapp) — and eventually his entire village — in transporting Jewish children to safety under the Nazis’ noses. The peril/sense of danger is strong, and violence is brief but shocking. A key sympathetic character is shot and killed, hunters shoot an animal, and a drunk man strikes a teen. While the movie’s themes and content are mature, the material is handled delicately, and characters demonstrate courage, compassion, integrity, and teamwork. Ultimately the message is about broadening your perspective to see that a person is more than a label. We see this happen through the two men Jo becomes friendly with: Benjamin, a Jewish dad (Frederick Schmidt) who’s trying to find his daughter, and a Nazi Korporal (Thomas Kretschmann) who misses his daughter back home and doubts the integrity of his mission. Substance use is historically accurate: Soldiers and adults smoke, drink, and hang out at the local tavern. 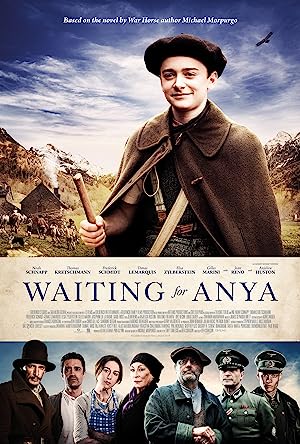 Be the first to review “Waiting for Anya 2020” Cancel reply