Tom Crick, a high school history teacher, is having trouble connecting – with his class, with his wife. He ventures into telling his class stories about his young adulthood in the Fens district in England. The emotional wounds from his younger life wash over him in present day, affecting his work and his relationships with his students and his wife.

Motion Picture Rating (MPAA)
Rated R for sexuality and language, and for an abortion scene

As a huge fan of Graham Swift’s novels, I was pleasantly surprised to see how well this complex and detailed work was compressed into film form. While I think Jeremy Irons, David Morrissey and Sinead Cusack are all outstanding in this film, I really feel that the transplanting of the frame from England to America diminishes the story. Surely Price’s nihilism is not merely a standard adolescent world-weariness, but a form of the punk sensibility contemporary with the book’s appearance. Still, the film does a good job of capturing the sense of place in its English scenes, and handles the poignancy of the story effectively. The film is good, but the book is immense. 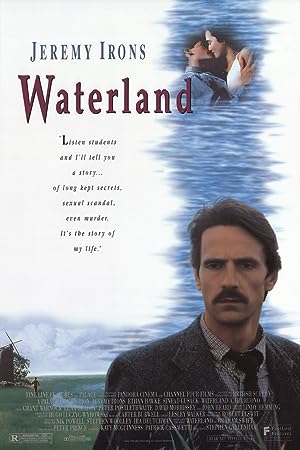 Be the first to review “Waterland 1992” Cancel reply