Home » Foreign Movies without Subtitles » We Are Thr3e 2018

Nacho is an accountant, an average guy. At a party he meets Ana, a recently divorced and self confident young woman. Then they meet the charismatic bartender Sebastian, who starts flirting with both of them. Despite their doubts, Nacho and Ana accept Sebastian’s invitation to spend the night at his place, where nothing happens. A few days later, they decide to go on a weekend trip to a secluded farm. And it seems like it will be a fun one-night-stand, until Sebastian confesses that he desires a long-term relationship with a man and a woman together.

Nacho (CHARLY ETCHÉVERS) is an ordinary enough guy, works at a Bank by day, and has only recently split up with his girlfriend. They remain on good terms however and she invites him to her birthday party where meets Ana (FLOR DRAGONETTI). She is almost the opposite to him a self-confident divorcee who has just started her own web-design business. As they strike up a conversation there is an obvious mutual attraction and they head to the bar together to get another drink.

As Sebastian (JUAN MANUEL MARTINO) the barman mixes cocktails for them he quite outrageously flirts with both of them and then abandons the bar to spend the rest of the evening with them. They all end up back in Ana’s apartment in a drunken stupor and fall asleep on the bed fully clothed.

Next morning Sebastian invites both of them to spend the next weekend with him in the house in the countryside outside of Buenos Aires where he is currently living. Both Ana and Nachos are highly intrigued and eventually agree.

Once there Sebastian lays his cards out on the table and tells the couple that he is a great believer in ‘love at first sight’ and fell in love them the moment he spotted them at the bar. What he would like is to start a relationship together with them and he is very open with how he feels about all the possibilities of such an arrangement. Ana is mesmerized but Nachos can only list a string of objections which seem to be a mixture of his own feelings and society’s general condemnation of any relationship like this outside the norm.

The very self-assured (not to mention highly attractive) Sebastian could charm the pants of anyone, and that’s exactly what he does and soon the three of them are in bed together making very steamy passionate love.

After the weekend Ana and Nachos are still unsure about Sebastian’s proposal and embark on a relationship together but this barely survives a few weeks, and when Sebastian re-appears after being away visiting his sick mother, all three know how they should now proceed.

This the second very entertaining movie from Argentinian filmmaker MARCELO BRIEM STAMM is a refreshing take not just on bi-sexuality but on the whole concept of alternative relationships that society frowns on and refuses to recognize. He quickly dispenses with the assumption that this is purely a sexual attraction, and by making Sebastian determined to start afresh with two people new to each other, rather than becoming a third wheel in a relationship that is in need of a lift, makes it all seem more authentic.

The natural chemistry between the three very talented actors boosted the story on every level, and the fact that Stamm allowed even Nacho to be comfortable with the unconventionality rang true too. Most kudos go to the fact that Stamm avoided the usual melodrama that writers seem to insist accompany any attempt at a menage a trois and actually gave his story a happy end was a very welcome change indeed. 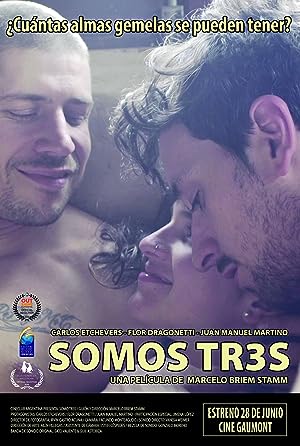