Two unpopular teenagers, Gary Wallace and Wyatt Donnelly, fail at all attempts to be accepted by their peers. Their desperation to be liked leads them to “create” a woman via their computer. Their living and breathing creation is a gorgeous woman, Lisa, whose purpose is to boost their confidence level by putting them into situations which require Gary and Wyatt to act like men. On their road to becoming accepted, they encounter many hilarious obstacles, which gives the movie an overall sense of silliness.

One of the best fantasy/sci-fi movies ever. Also a good 80’s flick. A lot of very funny jokes and laughs. Anthony Michael Hall and Ilan Mitchell-Smith do a good job playing nerds and are hilarious. Kelly LeBrock as the cyber girl Lisa, is hot. A feel good 80’s movies written by the master John Hughes. A must see. They wouldn’t be able to make a movies like this these days. I love the 80’s. 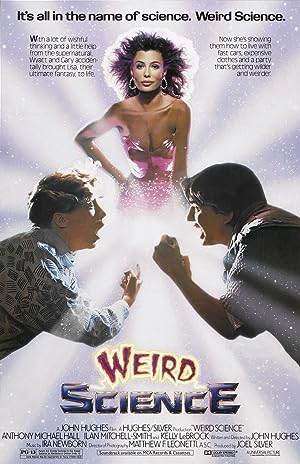 Be the first to review “Weird Science 1985” Cancel reply