Haunted by his life on stage in France, Maurice Lesmers seeks refuge in a remote town in Northern Canada. To make ends meet, Maurice takes a job tutoring French to 15 year old Allan, a shy student struggling at school; and lands the leading role in the local theatrical production of Moliere’s The Miser. Maurice is surprisingly drawn to the stage manager, Michael but as Michael pushes for a relationship with Maurice, Maurice becomes tormented by childhood memories and recklessly immerses himself in Allan’s adolescent world to protect Allan from a high school bully. When Allen misinterprets Maurice’s attention for affection, Maurice’s past catches up with him and he must confront a dark secret in order to stay in the community.

Maurice (Maxime Desmons) has relocated from Paris to a small North Canadian town. He is running away from a past that he can not face and decides to get a job acting as that is his profession. The pay though is basic so he advertises to tutor in French. His advert is answered by the mother of Alan – a withdrawn but talented teenager.

Maurice seems to alienate all around him despite his abilities but Alan finds him to be inspirational. Meanwhile Maurice is trying to fit in at the theatre but even as his acting is excellent the disaffected youth whom he is tutoring starts to get to him through the boy’s overt needs.

Now this is a really well made and intentioned film. Alex Ozerov as Alan is superb (actually from Russia originally) and the story line is original and engaging, some of the back story is told in flashback and that is done with real style too. This is a film that is gay themed but would be easily for a wider audience as the themes are universal and I have to see I appreciated this very much indeed. 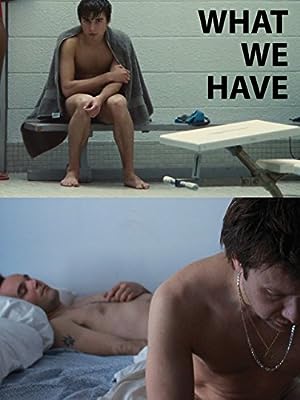 What We Have (2014)
89 min|Drama|18 Sep 2014
5.7Rating: 5.7 / 10 from 128 users
WHAT WE HAVE is is the tale of Maurice, a prisoner of his past who is unable to connect with the people in his new Northern Canadian small town, a community that is only too ready to welcome this European misfit into their arms.
Director: Maxime Desmons
Creator: Maxime Desmons
Actors: Maxime Desmons, Roberta Maxwell, Jean-Michel Le Gal, Alex Ozerov