The story of a shy boy who gets convinced by his parents to spend a few summer days in the mountains. So, he joins a group, and the vacation begins. Unfortunately, things turn out to be a little tough for our small friend.

Young teenaged boys indeed swear and use the very best of profanities amongst each other. This kept the dialogue surprisingly believable-it didn’t seem contrived and wasn’t overdone.

I also found very believable Vic’s character as wilderness guide to these young teenagers. Even when he left Allen on the other side of the bridge and later hanging by the cliff-he reassured Allan that the group would be just a little further ahead waiting for him. Vic seemed to me to be trying to teach Allan that indeed he could accomplish what the other kids had just done. He almost told Allan this word for word. Wasn’t that the whole point of the trip? Vic was harsh but he didn’t break any laws or otherwise act unscrupulously punitive.

However, it is true that Vic was scapegoating Allan. He made all the other kids carry the canoe and then took Allen for the ride-an insidious decision that Vic tried to pull off as spontaneous. And Vic was far too punishing when he left Allan alone (especially overnight!) on the island because he caught the fish the wrong way.

I found it extremely unbelievable how the kids ended up almost killing Vic, and then so resolutely decided to just leave him there (only Allan behaved remotely believably). Vic did not abuse his authority so much as to incite in those kids that kind of desperate mutiny-of-sorts. If this ever happened in reality it would be most unusual and remarkable. 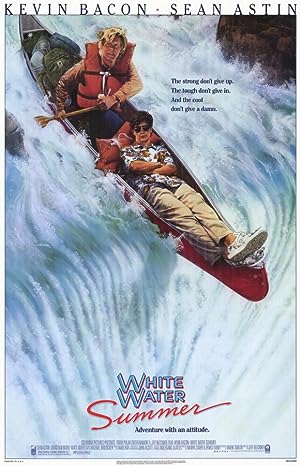 White Water Summer (1987)
90 min|Adventure, Drama|10 Jul 1987
6.2Rating: 6.2 / 10 from 4,613 users
The story of a shy boy who gets convinced by his parents to spend a few summer days in the mountains. So, he joins a group, and the vacation begins. Unfortunately, things turn out to be a little tough for our small friend.
Director: Jeff Bleckner
Creator: Manya Starr, Ernest Kinoy
Actors: Kevin Bacon, Sean Astin, Jonathan Ward, K.C. Martel

Be the first to review “White Water Summer 1987” Cancel reply