Why Hast Thou Forsaken Me 2015 with English Subtitles

Muhammad, a rejected boy from the fringe of society, floats through the streets of a filthy city, exposed and desolated, until he meets Gurevich; a lone rover who rides his motorcycle into the bowels of the city, through the shadows of the back alleys, sharpening the knives of butcher shops and gourmet restaurants. Stubborn and tenacious, the boy forces his way under the man’s wing. Within this hypnotic urban hell, what starts as an unstable and hesitant apprenticeship evolves into a struggle for self-control.

Relying on a non-professional cast, in her first feature, Why Hast Thou Forsaken Me [+], Israeli director Hadar Morag introduces us to the responsibility that comes with being of flesh and blood through the young Palestinian Muhammad – an outsider in many ways. And so Muhammad cruises the streets of Tel Aviv on his BMX bike – when in the knife grinder Gurevich he seems to find something he was looking for. Just like Muhammad, Gurevich is a restless and, in a way, troubled man. His job takes him and his motorbike from slaughterhouses to gourmet restaurants, sharpening their knives. Muhammad, somehow taken with the figure of this free spirit, follows him. Finally taken on and introduced to knife sharpening, he finds out a secret about Gurevich, a similar kind of secret to the one he has also been hiding himself. While one of the two gives in to his body, the other literally draws a line – carved into the flesh. After her short film Silence, which was shown at Cannes in 2008 in the Cinéfondation section, her first feature – an Israeli-French co-production by Cassis Films and EZ Films – is being screened in competition in the Orizzonti section of the 72nd Venice Film Festival, and is also included in the Sala Web films selection.

To talk about Why Hast Thou Forsaken Me is to talk about its imagery – and especially the portrayal of corporality and physical labour. With almost no dialogue, the film gives an account of the special relationship growing between Muhammad and Gurevich. The latter seems to grow into a kind of role model for Muhammad, as can be observed from a scene that shows them both taking a cigarette break while Muhammad playfully copies Gurevich’s every move. But the moment comes when Muhammad proves to be the one taking action and thereby taking responsibility for his deeds and his body. At times mystically enigmatic, Why Hast Thou Forsaken Me is no light fare, and shows the director’s ties to her prior studies of Theology and Philosophy. 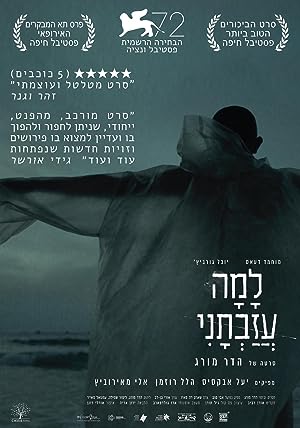 Why Hast Thou Forsaken Me (2015)
94 min|Drama|08 Sep 2015
4.7Rating: 4.7 / 10 from 43 users
Muhammad, a rejected boy from the fringe of society, floats through the streets of a filthy city, exposed and desolated, until he meets Gurevich; a lone rover who rides his motorcycle into …
Director: Hadar Morag
Creator: Hadar Morag
Actors: Muhammad Daas, Yuval Gurevich