Home » Movies in English » Wizards of Waverly Place: The Movie 2009

Wizards of Waverly Place: The Movie 2009

When Alex ruins a family vacation by accidentally casting a horrible spell on her loved ones, Max works overtime to keep his parents from separating while Alex and Justin seek out the “Stone of Dreams” in a desperate race to reverse the curse.

I’m surprised that the Walt Disney Studios didn’t release this film version of their series The Wizards Of Waverly Place to the big screen first as they did with Hannah Montana. Given the special effects it probably would have been better served on the big screen.

Be that as it may, I think more than the fans of the television series would appreciate this one. When I reviewed the television series I said that the kids reminded me of the Partridge Family offspring. They still do, but in the course of the film the story is more of a Harry Potter type story.

Selena Gomez who’s the pretty, but slightly rebellious middle child balks at the restrictions in general placed on her magic by her parents, but even more so when the family goes to the Caribbean for a vacation. With a really powerful wand in her hand, she says something really dumb like she wishes her mother and father had never met. So when David DeLuise and Maria Canals Barrera treat her and brothers David Henrie and Jake T. Austin. Of such wishes are Twilight episodes and It’s A Wonderful Life plots spun.

The only thing to do is for the kids to find the Stone Of Dreams which can reverse any spell. But Gomez, Henrie, and Austin have other folks looking for the same Stone to cure their problems.

The cast of the show is an appealing one and the show itself might gain a few viewers with this film. But it really should have gone to the big screen first. 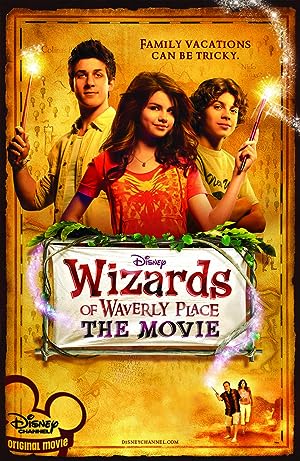 Be the first to review “Wizards of Waverly Place: The Movie 2009” Cancel reply