You’ll get over it 2002 with English Subtitles

When Vincent finds himself a victim of outing in his high school, he must accept to live with the drastic changes it provokes, and redefine his relationships with his friends and family.

I’ll never get tired of cute-gay-boys-coming-out stories, and this is no exception. But it left me a little hollow. The storyline with dealing with his parents is left unfinished, as it is especially with his brother, who rejects him seemingly out of homophobia but whose true issues are revealed, and undealt-with, in his last scene. The subplots with the homophobic teammates, the sympathetic teacher, and the older sex partner were also left as loose ends.

The scene with the creepy Marais was completely gratuitous, with friends of Vincent’s sex partner who fling themselves at him in a way that seemed not just slimy but completely unrealistic, as well.

In all, I thought that “Get Real” was a more masterful treatment of a very similar subject, and “Edge of Seventeen” better still. But this one is certainly a feast for the eyes, and if you like the “aawwwwwww! he’s cute and gay and 17 and coming out!” factor as much as I do, this won’t waste your time. 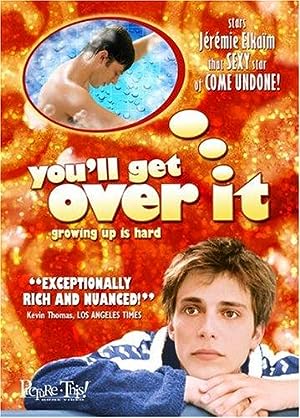 You'll Get Over It (2002)
86 min|Drama, Romance, Sport|13 Mar 2002
6.6Rating: 6.6 / 10 from 1,909 users
When Vincent finds himself a victim of outing in his high school, he must accept to live with the drastic changes it provokes, and redefine his relationships with his friends and family.
Director: Fabrice Cazeneuve
Creator: Vincent Molina
Actors: Julien Baumgartner, Julia Maraval, Jérémie Elkaïm, François Comar