French teenager Isabelle is spending her summer holiday with her middle-class family in the south of France and decides to lose her virginity with German teenager Felix. Then she returns to Paris with her mother Sylvie, her stepfather Patrick and her younger brother Victor. Then Isabelle works as a call girl using the nickname Lea, meeting old men. She feels affection for her client Georges that is married with a daughter. When Georges dies from a heart attack while having sex with Isabelle in a hotel, she flees but the police investigate and identify her. The detectives in charge of the investigation disclose to Sylvie, who is devastated.

This film is incredibly slow and apathetic, but that’s the beauty of it. Isabelle (Marine Vacth), a girl with a stable family who finds herself in a stable environment, is a strange creature. From what I’ve noticed, she only had a real connection with two people: her little brother and Alice (Charlotte Rampling). She decides to become a prostitute, even though she didn’t need the money and could’ve had sex with any young guy, and her reasons to start doing such a thing aren’t clear. Franxc3xa7ois Ozon directed a film with a lot of million dollar questions.

From my personal perspective, she did it for the taste and the thrill provided by the sense of being independent, of doing something dangerous and morally wrong. Even though she felt somewhat disgusted and guilty for having sex with strange men, she kept doing it to, somehow, prove herself that she didn’t need anyone’s approval to do what she wanted to do – in this case, a dangerous and morally wrong thing. She probably didn’t plan to tell anyone, but her family found out in a bad way. I see her as a rebel hearted girl who feels trapped in a cage (in her case, her mother, society, morality, a nice and stable life) and who’s holding back her feelings because, if she let them out, they might be too overwhelming – that’s why she so apathetic all the time. Or maybe she just couldn’t care less about anyone because life is boring and we’re gonna die.

I enjoyed the film. I enjoyed the photography, the scenarios, the actors, the language, etc. It’s not an exciting production, though. It’s the perfect movie to watch on a rainy Sunday, when there’s nothing else to do. 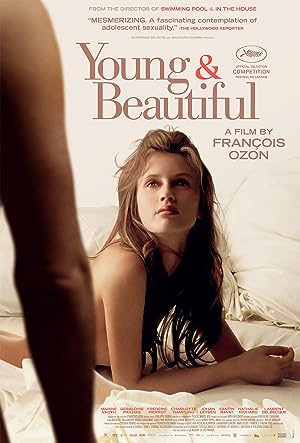 Be the first to review “Young & Beautiful 2013” Cancel reply