Tommy, 10 years old, is well known by Social Services. He is considered a danger to society. Gilles, his guardian at this halfway house, sees potential for redemption in this kid driven by violence.

Having heard many positive reports about this film I sought it out for months. Although I’d have been happy to pay for a download or a copy on optical media I eventually had to resort to underhand methods of online acquisition — and then, finding the Canadian French dialogue and its Quebecois argot incomprehensible, go on a further search for subtitles.

Was it worth the effort? For me, certainly; but I stop short of recommending it to others.

The story, such as it is, centres around 10 year-old Tommy Leblanc (played with outstanding skill and sensitivity by a 13 year-old Robert Naylor). Tommy is from a broken home, a thorn in the side of social services. He is short-fused, violent, inappropriately sexualised and gets sent to (what we in the UK call) a secure unit, or locked children’s home, for assessment.

The question posed is whether young Tommy is a hopeless psychopath in the making or whether he can respond to the professional help from the well-intentioned but overstretched staff at the unit.

The signs don’t auger well. Within minutes of the opening title we’ve seen Tommy masturbating to a hard-core porno-movie, forcing a younger boy to commit an act of gross indecency and then getting his face beaten to a (sickeningly realistic) pulp by that kid’s older brother. (I did say that this film pulls no punches, didn’t I?) Then within days of his arrival at the home, he’s kicking off in the face of the staff’s best efforts to support him, smashing the place up and creating a thoroughly nasty atmosphere for both his carers and the other volatile young boys resident there.

Personally, I found Robert Naylor’s performance (ably supported by Claude Legault’s portrayal of his sympathetic but long-suffering key-worker) heart-wrenching and deeply moving; but then I’m a teacher of kids with emotional and behavioural disorders. I can quite understand how, to anyone without a special interest in child psychology, Tommy would come across as an insufferable little brat who deserved what was coming to him — negating what, I assume, is the fundamental message of the film.

I’m not knocking it. Daniel Grou’s direction is first-class and the cinematography, using hand-held cameras that give the piece that air of a reality TV show, together create the grim aura of a facility for disturbed youth with considerable aplomb. And however one views him, Tommy comes across as real — scarily so. Could this really be a child actor depicting so vividly the rage and panic descending into desperation for a badly damaged little boy? But in my view this is in spite of rather than thanks to the screenplay. Convincing though the characters’ emotional responses may be, they all lack depth as people. There is little development of either the characters or the narrative, despite the manifest opportunities to do so.

Given that the film is clearly well-researched and skilfully constructed, I can only assume that this was intentional on author Claude Lalonde’s part. And, fair dues, in real-life situations such as these, the players often do come across as two-dimensional; nothing particularly interesting does happen beyond things getting broken, staff getting stressed and tempers getting frayed. But this is not reality TV. It’s a screenplay, a feature film, and I guess in that context I hope for just a l’il bit more.

And if you’re not going to use the wonderful potential of Tommy’s inadequate beatnik father (for whose portrayal Martin Dubreuil deserves an honourable mention) and his mentally ill mother as vehicles to develop the narrative then why bother to introduce them as nothing more than failed parental stereotypes? Not to mention Tommy’s encounter with the paedophile Nomand towards the end which could have been (and may have been intended as) a thoughtful counterpoise to the opening scene but in the event was an all-too-predictable and meaningless throw-away.

As for the ending, what an underwhelming anti-climax! It may have addressed, in part, the question posed at the beginning but I think most of us had worked that one out mid-way through the film. This is not an easy movie to watch: it’s disturbing — harrowing in parts — and to fob an audience off with such a weak finale isn’t “minimalist” in my view; it’s a con.

Nevertheless, this is a powerful piece of cinema and, though it won’t be for everyone, it deserves wider distribution and recognition than it has. 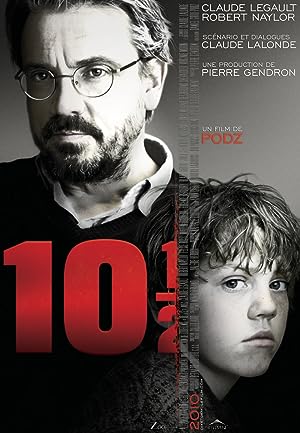