Anna is a young widow who is finally getting on with her life after the death of her husband, Sean. Now engaged to be married, Anna meets a ten-year-old boy who tells her he is Sean reincarnated. Though his story is both unsettling and absurd, Anna can’t get the boy out of her mind. And much to the concern of her fiancé, her increased contact with him leads her to question the choices she has made in her life.

If you see Birth, go in realizing it is an art-house film, not a mainstream thriller. If it didn’t have Nicole Kidman in it, this film would be playing in less than 10 theaters in the country. But because of Kidman, it is playing in your local cineplex but this is not a film for the cineplex crowd. If you are looking for something like The Others, The Sixth Sense, or Ghost; do not see this film.

Birth is a film where atmosphere means more that dialog. This is not a fun film. The people in the film are very deadpan and do not smile; especially the child. Much has been made of the bath scene but that is actually one of the least radical parts of this film. The thing that will upset most people are the long close-ups without any dialog. Also, the conclusion does not tie up as many loose ends as a mainstream film. This film wants the viewer to think about it afterwards.

Nicole Kidman and Lauren Bacall are great but for me, Anne Heche almost stole the film with her small part. Also, the music is atmospheric and a real treat if you like symphonic music.

This is a beautiful film to look at and listen to. The story will keep you guessing which direction it is going to go. Whether you are happy with the outcome or not will probably depend on your expectations. Go into this film with an open mind. 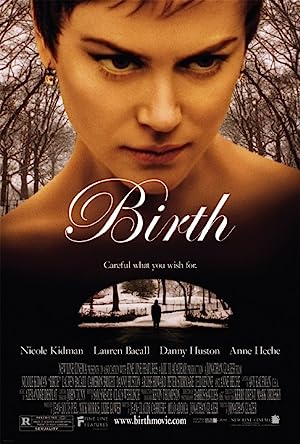