In England in 1987, a teenager from an Asian family learns to live life, understand his family and find his own voice through the music of Bruce Springsteen.

I enjoyed this movie very much once I got beyond being dragged back to the 80’s with the dodgy hair and flares.

The movie explored many themes and these provided the backdrop for a rites of passage of a young Pakistani man growing up in Luton. He needed to make sense of the world and this was through the cipher of Bruce Springsteen’s lyrics and music.

1, whilst dealing with racism it was presented as a feature of the time, it did not take over the movie.

2, the story was more important than realism and we had moments when the movie took off with musical numbers.

3, the whole cast did a brilliant job particularly the mum and the dad,

4, Javed play by Viveik Kalra was a masterclass in micro-emotions, the whole movie rested on this young man and he delivered the goods. Skills way beyond his years.

5, the music and graphic were great I just wish I was more familiar with the Boss’s music but we were listening to Kate Bush and Duran Duran.

6, Margaret Thatcher brought a decade of pain to Britain as she transformed a bankrupt state to a market economy. It was necessary but had terrible effects on people’s lives and this was shown effectively here.

This was a very niche movie, very claustrophobic and there was very little action but I enjoyed it immensely. 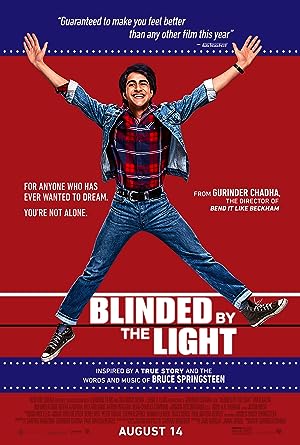