Single mom Laura (Farmiga), along with her awkward 14 year-old son Henry (MacDougall) is forced to drive Jack (Plummer), her estranged, care-free pot dealing father across country after he’s kicked out of yet another nursing home. The road trip veers off course when Jack decides to make a couple ‘stops’ and Henry asks to see his ne’er-do-well dad Leonard (Cannavale), completely upending Laura’s attempt to hold her family together and ultimately forcing her to finally see her father for the man he really is.

Ignore the bizarre posts below mine just trying to smear the film for… political reasons? I’m not sure. Boundaries is a solid indie film that had my entire theater laughing throughout. The acting was very good–Christopher Plummer was, no surprise, great.

This is worth a theater watch. Maybe the trolls need to buy some of what Chris Plummer’s character in the film is selling and chill out a little. lol 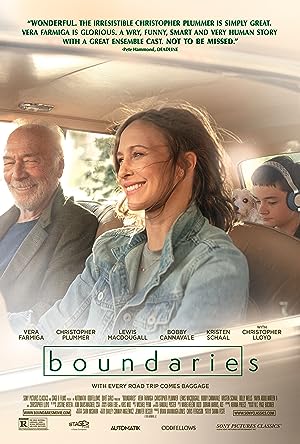 Be the first to review “Boundaries 2018” Cancel reply