It’s 1984, and Michael Jackson is king-even in Waihau Bay, New Zealand. Here we meet Boy, an 11-year-old who lives on a farm with his gran, a goat, and his younger brother, Rocky (who thinks he has magic powers). Shortly after Gran leaves for a week, Boy’s father, Alamein, appears out of the blue. Having imagined a heroic version of his father during his absence, Boy comes face to face with the real version-an incompetent hoodlum who has returned to find a bag of money he buried years before. This is where the goat enters.

I had been told how funny this movie was, and there are quite a few chuckles in the first 20 minutes or so, and then it buckles down to show us the real story of pre-pubescence in a rural community and the father-son thing. It was explored in depth and very well too, and never gets nasty as some NZ movies can do, but still wrings your heart out. The end-piece was stunning, utilising the obsession with a teenage Michael Jackson and humour as only the NZ Maori do. I left the theatre with mixed feelings but since then I have felt buoyed up (sorry) and am remembering it fondly. Will definitely see it again and may add it to my small collection of NZ films. Others have mentioned Eagle and Shark and Secondhand Wedding, but this is more historical and captures the era perfectly. Well done all – especially to all the actors under 20, we know the adults can act, but these fellas will be worth watching out for in the future. 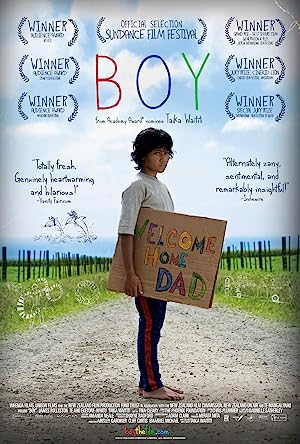