Chronicle Of A Boy Alone 1965 with English Subtitles

CHRONICLE OF A BOY ALONE, is an indictment of a fascist regime running roughshod over its most vulnerable citizens, its children. Focusing on the bleak life of eleven-year-old bad boy Polin, who’s been abandoned by his family and sent to live in a state-run orphanage, it’s also a moving portrait of the human spirit imprisoned by the chains of well-intentioned fools. Inside the harsh confines of the supposedly beneficial institution, Polin and his fellow inmates must deal with constant physical and psychological abuse by the staff, as well as the natural emotional tensions brought on by their own burgeoning adolescence. But through it all, they manage to keep their hopes alive with optimistic talk of freedom and bold plans of escape. One day, when the opportunity finally arises, and Polin learns that freedom, too, has its price.

From the harsh reality and black and white existence of the 1950’s comes this somber tale of a young boy imprisoned in the bleak world of Argentinian totalitarianism. Directed by Leonardo Favio, the film “Chronical of a Boy Alone ” offers a brief visit to the sterile life of Polin, a boy abandoned by both family and society who briefly escapes to freedom. Polin exists in the day to day world of poverty and violence. Within the confines of a state run orphanage, he experiences both the indifference of the authorities and his peers. Friends are a hindrance and family a tiny island in a sea of despair. The film is in black and white as was life in the 1950s’. Brief nudity. 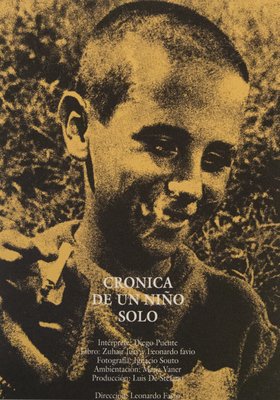